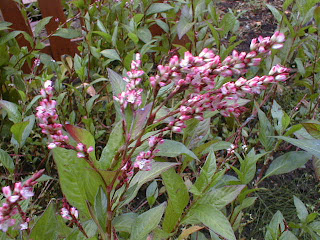 This is a photo of the indigo plant most commonly used in Japan. It is a member of the buckwheat family and called tade ai (タデ藍）in Japanese. the scientific name is Polygonum tinctorum. The flowers can be either pink or white and don't effect the color of the indigo. If you pinch the leaf it will turn blue where it's bruised. The leaves can be used either fresh or dried to get a light blue or light turquoise, and also pinks and purples on silk fabrics under certain conditions but these colors are not stable. To get the faster dark indigo blue you must have an oxygen free vat and repeatedly submerse and then oxidize your fiber. 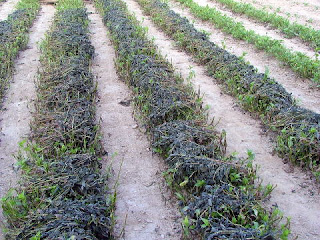 The following photographs are from a Japanese homepage called Seirantei (青藍庭 which literally translates to 'Blue Indigo Garden'), a sukumo making company in Tokushima which is basically the center for indigo in Japan. There are some beautiful pictures throughout the page and it's definately worth a look at.
http://www6.ocn.ne.jp/~seiran1/index.htm

Here you can see the leaves in the field tinged with blue. 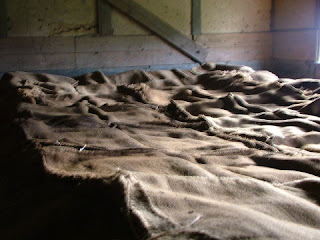 Sukumo is the composted leaves you start your vat with. The 40 liter vat I made uses 2 kg of sukumo. I use around 8 kg in the pots I normally deal with. To make the sukumo the leaves are collected and piled in a traditional wood and mud wall barn (kura/蔵) with a dirt floor and sprinkled with water and lime. As the leaves begin to compost they generate heat.

Here the compost is covered with burlap. 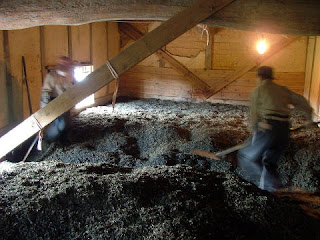 The leaves are turned over everyday and continually sprinkled with water and lime to induce the fermentation. It is a hot and steamy, very labor intensive job to keep these leaves composting properly. It also has a quite intensly organic fragrance.

This process is different from the extraction process most commonly used in India where the fresh leaves are fermented in a high alkili solution to dissolve the indican and then stirred or beaten or actually run around in by laborers to oxidize the liquid which is then allowed to settle, the top liquid discarded, and the end sludge collected as pigment which can then be used in a reduction vat for dyeing.